Arrived here via a search engine? Go to the main Ayrshire Paths website.

The History of Loch Doon area 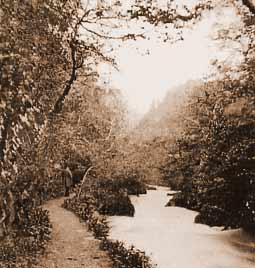 His visits to the area included the magnificent Ness Glen where the River Doon flows through dramatic rock gorges amidst deep pools, and along attractive 'banks and braes' on its way to the poet's home at Alloway where it meets the sea at Doonfoot.


Aft hae I rov'd by bonnie Doon,
To see the rose and woodbine twine;
And ilka bird sang o' its love,
And fondly sae did I o' mine.
Wi' lightsome heart I pu'd a rose,
Fu' sweet upon its thorny tree;
And my fause lover stole my rose,
But, ah! he left the thorn wi' me."

Burns corresponded with the local Macadam family, (later of tarmacadam fame). John Macadam of Craigengillan Estate (just to the West of Ness Glen) was a local landowner. It was Quintin Macadam in the early 19th Century who engineered the existing paths at Ness Glen. 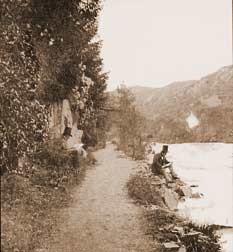 There was an upper path and a lower, riverside path that was later known as the Ladies' Walk. This was damaged by floods in the 1950's and is now impassable. Craigengillan Estate is currently working on a project to re-establish the route and it is hoped that it will re-open in summer 2005.

Clearly the Macadam family had a tradition of engineering for in 1760 the Earl of Cassillis and Macadam of Craigengillan created tunnels under Loch Doon to lower the water level and recover land for farming.

A local poet and blacksmith Robert Hettrick was inspired by Burns when in 1823 he wrote the poem entitled "The Craigs of Ness".


"Doon, issuing from her slumbering bed of rest,
Is downwards through the rocky tunnel prest,
Then dash'd against yon shelvy, pointed rock,
Which, unmolested, stands the furious shock,
And turns the torrent to the other side,
Which, in its turn, resists the furious tide;
Here dashing on the precipices steep:
There boiling in the dreadful caverns deep;
Now madly raging o'er the ragged linn,
Mocking the voice of thunder with its din,
Bathing the margins with the foamy spray;
And thus the tortured waters pass away,
Leaving the caverns, linns and rocks behind,
For banks and channels of a gentler kind,
Where woods and lawns alternate please the eye
Where music swells in ilka leafy grove,
In all the charms of harmony and love
And fair Barbeth stands clad in summer green,
Adds lustre to the wild romantic scene."

The area is close to Dalmellington, where there are a number of historical and industrial heritage sites. In the centre of the town is a well preserved Motte, a flat-top cone of earth used as a type of defence in the 11th and 12th centuries. The Dalmellington Motte dates from the time of William the Lion although there is evidence of Neolithic activity here dating back 6000 years. The name Dalmellington (dael meallain tuinn) means 'meeting place at the mound with a Motte'.

Also in Dalmellington you can learn about the area's weaving heritage at the Cathcartston Visitor Centre. You can see a reconstruction of a weaver's room and enjoy an audio-visual presentation on life in the Doon Valley in the 18th century.

Loch Doon reservoir is an attractive 7 mile stretch of water. Originally there were various small islands in the Loch before it was dammed and the water level rose some 27 feet. Prior to the flooding Loch Doon Castle was removed from its remote island and relocated to the shore. Not all of the stone was moved and at low water the original island and remaining stones can be seen. The castle dates from the 13th Century and was said to be used by Robert the Bruce. Sir Christopher Seton, a follower of Bruce sheltered here after the Battle of Methven in 1306 but was soon taken prisoner by the English and hanged as a traitor in Dumfries. The castle was set alight during the reign of James V in order to destroy his Lords' castles and maintain his authority. To view some images and video clips of the castle click here.

In more recent times the Loch was the scene of extensive development during the First World War. In 1916 a gunnery target range was devised to enable the planes based at Turnberry to practice on moving targets. The targets were to be carried on rails around the Lochside. The whole affair proved to be unsuccessful and despite spending an estimated £1m on the project very little remains to this day. A few concrete structures can be seen around Macnabstone.

You can see some images of Loch Doon's aviation project and general history of Loch Doon by searching the Scran website www.scran.ac.uk.

In more recent years a second World War Spitfire Mk11 was recovered from the waters of Loch Doon in 1982. You can see some photos of the exercise by clicking here.